WINNER OF THE 2003 SIR WALTER RALEIGH AWARD FOR FICTION

“Duncan has a fine ear for dialect, which finds expression in a series of striking set-pieces....Well crafted, with expert attention to the cadence of regional speech patterns, these short pieces ring with the authority of oral history....It is a novel with heart.”
—Washington Post

“Duncan’s ruminative exploration provides a thought-provoking look at how women’s roles change over generations as the world around them changes.”
—Baltimore Sun


It’s Christmastime in Russell, North Carolina. For Laurel Granger, the holiday can’t pass quickly enough. With her fifteen-year marriage ending, the visit to her hometown is bound to be even more painful than usual. And the worst part will be looking at the lives of her mother, Pansy, and Pansy’s gossipy group of friends, for whom life revolves around the plant, the aging textile mill where for decades they have found companionship, a modest livelihood, and a purpose.

But with her own marriage disintegrating--the full scope of the disaster hasn’t become clear to her yet--Laurel has nowhere else to turn except Russell, and to the women of the plant. And soon what Laurel begins to see is not the stifling town she couldn’t wait to leave, nor women whose lives seem petty and plain, but a place where powerful secrets have been kept...where hearts and lives have been broken...and where a group of extraordinary women may have a thing or two to teach her about life. Most of all, as Laurel starts to live and even love a little again, she is faced with her mother, and her mother before her, and what their complex relationship has meant for Laurel all these years.

Weaving together the voices of several remarkable women across generations, Pamela Duncan tells a story of faith and forgiveness, acts of love and acts of betrayal. With the same artful brushstrokes that made Moon Women a wonder, Duncan paints a masterful portrait of seemingly ordinary lives, and of what it means to grow a life and a future--in the rich soil of the past.

LEE SMITH (The Last Girls):
Plant Life is an American classic. Like Our Town or Winesburg, Ohio, it presents a compelling and moving portrait of an entire community. In this case, it is the life of a cotton mill, and three generations of women who work there---whose whole lives have been determined by the mill. Stark, poetic, funny, gritty, and intense, their stories will move you to tears and make you laugh at the same time. Never have the lives of Southern working women been so well documented, their stories so truly told. Plant Life is a mature work of a great compassion and insight.

SILAS HOUSE (A Parchment of Leaves):
PLANT LIFE is sometimes hilarious, sometimes heartbreaking, but always real. Pamela Duncan doesn't just write a great novel--she pours her heart out onto the page, giving a piece of herself to the reader. Here she is exploring the terroritory she knows best: families and friendships and the friends who feel like family. She tells these people's stories with honor and grace but never a hint of sentimentality. This book is full of the hard-earned wisdom of working people, people who dream and love as hard as they work. PLANT LIFE is a beautiful book from a writer who gets to the soul of the matter.

Clyde Edgerton (Lunch at the Picadilly):
Here's a novel you can pick up, open to any page, and start reading. The characters and prose will hold you as hands hold you. Pamela Duncan is a word master--one "smoking" novelist. This is her second novel and she's already producing a body of work that will be read and studied and enjoyed for a long, long time. PLANT LIFE is a worthy successor to her hard-to-follow first novel, MOON WOMEN.

BOOKPAGE:
A healing journey home
Plant Life, the second novel by North Carolina writer Pamela Duncan, adeptly captures the complex emotions of one Southerner's return home. Readers are introduced to Laurel Granger, a resident of Las Vegas, shortly after her divorce from her husband of 15 years. Proving that age and station in life don't matter much when it comes to a broken heart, Laurel retreats home to Russell, North Carolina.
As December turns to February, Laurel eases slowly back into the familiar routine of small-town Southern life. After years of attempting to distance herself from the place and carefully monitoring her voice for even a trace of a North Carolina accent, she gradually begins to feel comfortable in her hometown once again. The absence of a place to buy a glass of wine and the constant bumping into former classmates, though, remain trials endured through gritted teeth.
With Laurel firmly re-established in Russell and employed at the same textile plant as her mother, the subtle transformation takes place. Laurel begins to appreciate being in a close-knit community. She allows her preferences and tastes to develop after years of ignoring them for the sake of her now defunct marriage.
While the expected cast of traditional Southern characters makes an appearance in Duncan's novel, each is fully developed in a deliberate, meaningful way. From Laurel's high school sweetheart--who, of course, is now married to a former cheerleader--to the family neighbor who tenderly cares for Laurel's mother during an extended illness, Russell is populated by believable folks who are a far cry from the usual saccharine stereotypes.
A novel as much about personal strength and integrity as the daily lives of mill women, Plant Life beautifully captures the passage of two seasons in a small town. Mentored by author Lee Smith, Pamela Duncan won fans and critical praise for her first novel, Moon Women, in 2001. With her second book, she confirms her place as a superior Southern storyteller. (Whitney Weeks)

KIRKUS:
The travails and triumphs of rural southern women
Russell, North Carolina, is the kind of small town that never changes--but Laurel Granger sure has. She isn't sure how to tell her family that she split up with husband Scott in Las Vegas, or that she may not even want to stick around after Christmas. Truth is, she has no choice but to stay and find a job at the mill, like her mother, Pansy, and all her mother's old friends: Idalene, Maxann, Percilla and Lottie May. Laurel isn't exactly thrilled to be right back where she started from, although everyone seems to love her just the same. She ruminates over her marriage--how could Scott dump her for a stupid, bleached blond named DeeDee?--and seeks answers in the past. Fortunately, no yearbook, no church program, no nothing is ever thrown away in Russell, and all are scrutinized in turn, their emotional charge duly noted. Laurel does a little snooping and discovers to her surprise that her mother, a talented artist, had planned to go to college, though she never mentioned it. A little more digging reveals that Maw Bert, Pansy's mother, kept her at home until she married, even burning all of Pansy's paintings. Laurel is appalled. Is she doomed to see her ambitions, her education, go up in smoke as well? Just what is it about this small town that keeps people here for generations? Alternate points of view are skillfully introduced as each of the five friends tells her story--as does Maw Bert, the redoubtable matriarch, who had her reasons for doing what she did. Laurel is thrilled to find that her mother's artwork wasn't destroyed after all, still glowing brightly despite the years of concealment under family photos in old frames.
Lovingly drawn, thoughtful characterization holds up despite the endless inventory of minutiae. A worthy second outing by the author of Moon Women (2001), though it has only the ghost of a plot. 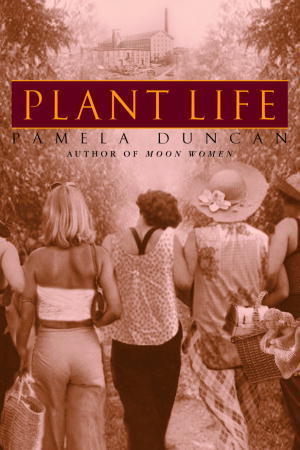